The Dynamics of Accumulation 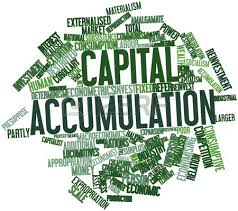 There are three models of accumulation in Marx’s Capital.

The Production of Surplus Value & the General Law of Capitalist Accumulation

This model explores the social & technological conditions that fix the rate of exploitation.

Although Marx analyses in value terms, there is a tacit appeal to market prices because wages are considered free to vary from the underlying value of labour power. The wage rate, the actual rate of exploitation, is fixed by the supply of & demand for labour power.

Marx presents two versions of this model, one with technological & organisational change, & one without.

The latter requires ever more labour power, whilst the former ‘becomes the most powerful lever of accumulation’.

There is a diminishing incentive to innovate as wage rates fall.

The share of wages in total social product can be diminishing while the real standard of living of labour, measured in use value terms, remains constant or even rises.

Marx did little systematic study of the process governing the production & reproduction of labour power itself (according to Harvey).

Marx argued that there is no such thing as a ‘universal law of population’, but that every special historic mode of production has its own special laws of population, historically valid within its limits alone.

Marx demonstrates that if misery, poverty & unemployment are found under capitalism, then they have to be interpreted as the product of this mode of production & not attributed to ‘nature’.

The reproduction schemas at the end of Vol. II focus on the problems that arise as capital moves from one state to another & in the exchange relations that must prevail if capital is to be realised.

Dept II produces use values for individual consumption – necessities for the workers & luxuries for the capitalists.

The model shows how definite proportionalities & relative growth rates have to be maintained in the production of means of production & consumption goods if balanced long-run accumulation is to be achieved.

Marx assumes all commodities exchange at their values, rather than their prices of production.

The model assumes no technological change.

Under the right conditions the model appears to show that accumulation can continue relatively trouble-free for ever.
This troubled Rosa Luxemburg to write her book The Accumulation of Capital denouncing Marx’s errors & omissions.
She is quite correct that Marx fails to explain where effective demand is to come from.

But Marx wasn’t trying to build a model of how capitalism actually worked in the real world.
He wanted to improve upon Quesnay’s Tableau économique to better understand the process of circulation of the aggregate social capital in terms of the class relations of capitalism.

Marx violates his rule of never treating any one of the triumvirate of value, use value & exchange value in isolation.

There is a serious conflict between the ‘viable technology’ defined from the standpoint of balanced exchange & the technological change required to sustain accumulation through production.

There is no guarantee whatsoever that the ‘viable technology’ & the ‘appropriate rate of reinvestment’ will increase the demand for labour in a manner consistent with its supply.

Marx eliminates the problems posed by money capital & the credit system on the grounds that they obscure the actual process of circulation of values.
But he recognises that the circulation of money & the creation of credit have real effects, while the production of a money commodity cannot simply be subsumed as a branch within Dept I because it has some very peculiar characteristics.

The schemas are designed only to yield theoretical insights.

The Falling Rate of Profit & its Countervailing Influences

A model built around the theme of the falling rate of profit.

Marx regarded the falling rate of profit as the most important law of modern political economy.

Ricardo thought this was because of diminishing returns in agricultural productivity.

Marx assumes commodities exchange at their values not market prices.

The credit system provides the mechanism to reduce different turnover times to a common basis – this is the rate of interest.

How on earth can the process of technological & organisational change, as regulated by individual capitalists acting under the class relations of capitalism, ever achieve the viable technology to permit balanced accumulation & reproduction of class relations in perpetuity?