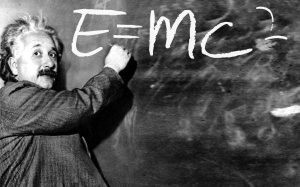 The objective is to describe Einstein’s theory of space & time

iv.      Edge of the observable universe is > 10 billion light years away

e.       Galileo’s principle of relativity – there is no such thing as absolute motion

a.       Faraday showed that magnetism & electricity are connected

b.       Maxwell’s waves showed the relationship between electric & magnetic fields travel at c – there is a link btw electromagnetic fields & c; c is a constant of nature

c.       1881 Michelson & Morley experiment showed there to be no difference in c in any direction at any time of the year

d.       That we can never catch up with a beam of light no matter how fast we travel infers that there is no absolute time

a.       Light is a symbiosis of electric & magnetic fields

i.      Light always travels through empty space at the same speed regardless of the motion of the source or the observer

ii.      No experiment can ever be performed that is capable of identifying absolute motion

c.       Thought experiment of the light clock (two mirrors bouncing a beam of light; the mirrors are 1m apart so the light takes 6.67 nanoseconds for a round trip)

iii.      Experimental proof comes from muons. At rest they live for 2.2 micro-seconds before turning into an electron & a pair of neutrinos
At a speed of 99.94% of c their life extended as Einstein’s theory predicted to 60 micro-seconds

iv.      Time is malleable & so is space as objects shrink when they move

a.       Einstein’s theory can be constructed almost entirely using the language of geometry

1.       Rotational invariance: The laws of nature do not change if we spin around. If they are unchanged irrespective of the direction in which we face then there exists a quantity that is conserved called angular momentum [The moon moves 4cm farther away from the earth every year due to friction from the sea on the surface slowing the earth’s spin; & so the earth day lengthens by two-thousandths of a second every century. The conservation of angular momentum is transferred to the moon which speeds up in its orbit around the earth]

2.       Translational invariance: The laws of nature are universal
Spacetime is the merging of space & time into a single entity & is invariant. It is an absolute

ii.      Causality: the order of cause & effect cannot be reversed

1.       Time can be measured in metres if we take any time interval & multiply it by a calibrating speed, such as the speed of light.

3.       The latter is a hyperbola & always in an area of a spacetime diagram that is above lines of 45° (the lightcone), & so respects the causality concept

4.       C is the cosmic speed limit. Nothing can travel faster than c because if it did it could be used to transmit information that could violate the principle of cause & effect

1.       Distances in spacetime are invariant

2.       Everything moves over spacetime at the same speed, c

3.       Something moving in space uses up some of its fixed quota of spacetime & so leaves less for its motion through time

a.       It seems that light itself is important in the structure of the universe

d.       Mass is assumed to be an invariant quantity

e.       Law of conservation of energy (unlike momentum, energy has no direction)

h.       The spacetime momentum vector shows us that in the space direction we have the old law of momentum conservation with a tweak for things moving close to the c

i.         Along the time direction of the vector we get a new version of the law of conservation of energy, where ½mv2 gets replaced with mc2 so that even an object standing still has energy associated with it, E= mc2

j.         Energy & mass are different manifestations of the same thing

o.       The energy locked away inside even quite small masses is mind-bogglingly large. A city of 100k people requires just one-trillionth of a gram of matter to be converted into energy every second, i.e. 3kg will last 100 years.

a.       Mass is a measure of the latent energy stored up within matter

b.       The more latent energy something has, the more massive it is

c.       For anything to happen at all in the universe, energy & mass must be continually sloshing back & forth

d.       Mass can be measured in electron volts. One eV is the amount of energy an electron gets when it is accelerated through a potential difference of 1 volt. It is divided by c2 to turn it into a measure of mass.

iv.      Note that the electron has mass

v.      This ‘negative energy’ is the amount of effort to dismantle the atom; its binding energy

vi.      There are smaller mass differences between the hydrogen & the sum of the proton & electron, as the electron can be in a different orbit

3.       The electron with the smallest mass has the electron closer to the proton (‘ground state’)

e.       Left alone, a heavier thing will turn into a lighter thing if at all possible

f.        Heavier versions of the hydrogen atom shed mass by emitting single particles of light (but isn’t light supposed to massless?) The excess energy is carried away by a photon

i.      Our eyes are photon detectors

g.       All of the atoms in nature come in a tower of energies (or masses), depending on where the electrons are, & since there is more than a single electron in every atom except hydrogen, the light emitted from them spans all the colours of the rainbow & beyond, which is why the world is colourful.

h.       Molecules are less massive than their comprising atoms as it takes energy to break them apart

i.         Uranium has 92 protons & 146 neutrons (in its most stable, naturally occurring form). Its half-life is 4.5 billion years, i.e. in this time half of the atoms in a lump of uranium will have spontaneously split up into lighter things, the heaviest of which is lead, & energy liberated as a result (fission)

i.      There exists a mineral known as zircon. It naturally incorporates uranium into its crystalline structure, but not lead. So any lead comes from the radioactive decay of uranium & permits high precision dating.

j.         When we bring two protons together one of the protons will spontaneously turn itself into a neutron & the excess positive electric charge is shed as a particle called a positron. They are +ve charged electrons. There is also a neutrino emitted. The proton & neutron come together under the influence of the strong nuclear force as a deuteron & the emission of a positron is called radioactive beta decay. (Fussion).

l.         Temperature is essentially nothing more than a measure of the average speed of things

i.      At 10,000 °C electrons are ripped from their orbits around nuclei, leaving behind a gas of protons & electrons known as plasma

ii.      At 10 million °C the plasma gets transformed into a star as nuclear fusion takes place. The deuterons fuse with protons to produce helium & the energy released in the star shinning.

iii.      The sun loses 4m tons of mass every second as it converts 600m tons of hydrogen into helium every second

iv.      When the hydrogen starts to run out the star begins to collapse. At 100 million °C the helium begins to fuse. They form beryllium (4 protons & 4 neutrons)

v.      Neutrinos flow out from the sun. About 100 billion pass through every square cm of the earth every second.

vi.      Once the helium is exhausted the collapse begins again. At 500 million the °C carbon fuses. It produces heavier elements all the way up to iron.

vii.      Neutron stars are more massive than the sun, but the size of a city. They emit beams of radiation known as pulsars. They can become black holes.

a.       The sun is several thousand times less efficient than the human body at converting mass to energy. 1kg of the sun generates 1/5,000 watts, whereas the human body generates more than 1 watt per kg.

b.       The master equation of the Standard Model explains how every particle interacts with every other particle – except gravity

i.      The first part explains the kinetic energy carried by W & Z particles, the photon & the gluon

ii.      The second part how every particle in the universe interacts with each other & the kinetic energies of all matter particles

iii.      The third part is a fix to the problem of gauge symmetry demanding no mass

c.       The standard model assumes the existence of:

iv.      For every particle there is a corresponding anti-particle

f.        Up & down quarks & electrons are the predominant particles of everyday matter

g.       The W & Z particles, the photon & the gluon are responsible for interactions between particles. They carry the force of interaction.

h.       The photon carries the force between electrically charged particles, such as electrons & quarks. It mediates the electromagnetic field.

i.         The gluon mediates the force that ‘glues’ protons together inside the atomic nucleus

j.         The W particle is responsible for the interaction that turns a proton into a neutron during the formation of a deutron in stars. The force carried by the W & Z particles is extremely weak.

k.       As it seems necessary to have only 4 particles to build a universe, the existence of the other 8 is a mystery

n.       The standard model unifies electromagnetism & the weak force. They are different manifestations of the same thing.

o.       The masses of the W & Z particles were predicted before they were discovered

q.       An electron & anti-electron (positron) bang into each other & annihilate to produce a single photon (so we start with some mass & end up with no mass?)

r.        For every observed matter particle there are around 100 billion photons

s.        The stuff of the universe that makes up stars, planets & people is only a tiny residue left over after the grand annihilation of mass that took place early on in the universe’s history

t.        We don’t know why the universe is not just filled with light

u.       The reason that protons, electrons & photons dominate the stuff of the veryday world is they have nothing to decay into. Up & down quarks are the lightest quarks. The electron is the lightest lepton, & the photon has no mass.

v.       The Higgs mechanism solves the problem of Gauge symmetry demanding no mass & the fact that there is mass

i.      It is what slows things from moving at c & is responsible for the origin of mass

a.       Is spacetime warped & curved differently from place to place in the universe?

c.       In a falling lift there is no experiment to distinguish between the possibility you are plummeting to the earth or floating in space. This universality of freefall is called the principle of equivalence

d.       Gravity is stronger the closer to the centre of the earth you are; the gravity at your feet is stronger than at your head

e.       The force of gravity is nothing more than a signal that spacetime itself is curved

g.       The sun is a massive object that distorts spacetime. The earth is moving freely through spacetime but the warping of spacetime makes the earth go in circles.

i.         Gravity is geometry & all things move along straight-lines unless they are knocked off course

j.         Pulsars (spinning neutron stars) were discovered in 1967. There is only one known instance of 2 pulsars circling each other (discovered in 2004). They cause gravitational waves.

m.     General relativity is not compatible with quantum theory