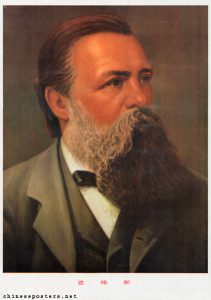 Socialism, Utopian & Scientific (Anti-Duhring, 1880)
“The extension of the markets cannot keep pace with the extension of production.”
“Thus it comes about that the overwork of some becomes the preliminary condition for the idleness of others, & that modern industry, which hunts after new consumers over the whole world, forces the consumption of the masses at home down to a starvation minimum, & that in doing so destroys its own home market.”

The Origin of the Family, Private Property & the State (1884)
“The state has not existed for all eternity. There have been societies that did without it, that had no idea of the state & state power. At a certain stage of economic development, which was necessarily bound up with the split of society into classes, the state became a necessity owing to this split. We are now rapidly approaching a stage in the development of production at which the existence of these classes not only will have ceased to be a necessity, but will become a positive hindrance to production. They will fall as inevitably as they arose at an earlier stage. Along with them the state will inevitably fall. Society, which will reorganise production on the basis of free & equal association of producers, will put the whole machinery of state where it will belong: into the museum of antiquities, by the side of the spinning-wheel & the bronze axe.”

“Just as Darwin discovered the law of evolution in organic nature, so Marx discovered the law of evolution in human history; he discovered the simple fact, hitherto concealed by an overgrowth of ideology, that humankind must first of all eat and drink, have shelter and clothing, before it can pursue politics, science, art, religion, etc.; and that therefore the production of the immediate material means of life and consequently the degree of economic development attained by a given people or during a given epoch form the foundation upon which the state institutions, the legal conceptions, the art and even the religious ideas of the people concerned have been evolved, and in the light of which these things must therefore be explained, instead of vice versa as had hitherto been the case.” (At Marx’s funeral)