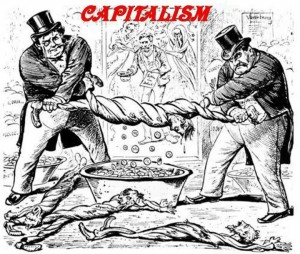 Chapter 7 – The Labour Process and the Valorisation Process

This chapter looks at production from two points of view:

Value is not a universal category but something unique to capitalism.
But the labour process is universal; independent of social formations.
The relationship between man & nature is a dialectical one; we cannot transform what’s going on around us without transforming ourselves.

Transformations in our instruments of labour have consequences for our social relations.

The main point is to show that the source of SV lies in the difference between the value of labour-power and the value created in the course of the working day.

It may only take half a day to produce the worker’s means of subsistence, but he can work for a full day. This is the source of SV.

Labourers are paid for the value of their labour-power, not for the value they produce.
The world of freedom, equality & property is a mask to permit the extraction of SV.

Thus the ‘contradiction’ is resolved: SV is created without violating the laws of commodity exchange.

The distinction between labour process and valorisation process is a fundamental one.

This chapter introduces the important concepts of constant and variable capital.

Marx argues that the value of the product is made up of the value added by the worker, on the one hand, and the value transferred from the means of production to the product.

This division corresponds to the division between abstract labour (the expenditure of socially necessary labour-time) and concrete labour (the production of a specific product by a specific kind of labour).

Variable capital is “that part of capital which is turned into labour-power and does undergo an alteration of value in the process of production” (p. 317)

For Marx capital is not simply the means of production.

Capital is a sum of money (value) laid out on means of production and labour power.

Labour-power has the unique property of creating value anew as it is used up.
Living labour resuscitates the value of dead labour congealed in past products.
Productive consumption is past labour that gets consumed in a current labour process to make an entirely new use-value; individual consumption is what gets consumed by people as they reproduce themselves.

There is a lot of past labour stored in fields, cities & physical infrastructure.

Chapter 9 – The Rate of Surplus-Value

This chapter introduces the concept of the rate of SV (rate of exploitation).

The total value of the commodity is made up of the value of constant capital, variable capital & surplus value (c+v+s).

Although the whole capital advanced appears to increase in the valorisation process, it is in fact only the variable part that increases.

Thus SV simply represents a portion of the worker’s labour-time.

Marx argues that the length of the working day is set within limits of the necessary labour-time (the minimum) and physiological and social maximum that can be sustained.

The capitalist class demands as much as possible, the worker demands a shorter working day.

Thus between these limits it is a struggle between capital and labour, the capitalist class and the working class, that determines the length of the working day.

Marx points to the tendency for capital to lengthen the working day as much as possible, far beyond the limits of endurance of the worker so that the labour force is debilitated.

He notes that this happens although it might seem to be in the interests of the capitalist to limit the exploitation of labour so as not to undermine the strength and numbers of the labour force in the future, but in fact capital does nothing because of overpopulation, which constantly provides new workers, and because competition between capitalists imposes such practices on every capitalist if he is to compete.

Thus it is the class struggle that determines the length of the working day.

Chapter 11 – The Rate and Mass of Surplus-Value

Marx establishes that the total mass of SV produced is equal to the variable capital advanced multiplied by the rate of SV (p. 418) – SV=VC.sv

There are limits to the extent to which capital can compensate for a reduction in the VC advanced (by employing fewer workers) by an increase in the rate of exploitation (by the lengthening of the working day) (p. 420)

If the value of labour-power and the rate of exploitation are fixed, then the mass of SV produced is proportional to the VC advanced (p. 421)

“This law clearly contradicts all experience based on immediate appearances” (since in practice capitals receive profit in proportion to the total capital laid out – the rate of profit).

To be a capitalist it is necessary to have a certain minimum quantity of money that can serve as capital (i.e. enough to bring back sufficient SV to live on the labour of others) (p. 422)

As capital takes command of production, the capitalist directs the labour of the worker, and the capital relation becomes a coercive one.

The machine becomes the master of the worker (p. 425)