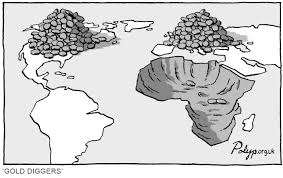 Marx considers the origins of the relations between labour and capital.

The process in which the workers (peasants and artisans) are dispossessed of their means of production and subsistence – the process of “primitive accumulation”.

How was this ‘freedom’ secured?
How did labour-power become a commodity?

The appropriation of the land was the primary means to dispossess the peasanty.

There is systematic theft of communal property, e.g. the enclosures & the Highland clearances.

The food supply becomes commoditised so fewer & fewer people can subsist on their own.

The transition from feudalism to capitalism occurred in stages such that merchants’ capital & usury pioneered the way for the rise of industrial capital.
Colonialism & the slave trade & part & parcel of the rise of capitalism, e.g. the cotton industry of Manchester.

“Force is the midwife of every old society pregnant with a new one. It is itself an economic power” (p. 916)

The colonial system allowed “the treasures captured outside Europe by undisguised looting, enslavement & murder” to flow “back to the mother-country” & be “turned into capital there” while “the public debt became one of the most powerful levers of primitive accumulation” (p. 918-19)

“While the cotton industry introduced child-slavery into England, in the United States it gave the impulse for the transformation of the earlier, more or less patriarchal slavery into a system of commercial exploitation”, thereby giving a stimulus to the slave trade, which fell under the increasing dominance of the British.

“Liverpool grew fat on the basis of the slave trade. This was its method of primitive accumulation.” (p. 924)

If money “comes into the world with a congenital blood-stain on one check, the capital comes dripping from head to toe, from every pore, with blood & dirt.” (p. 926)

The world market forms to impart an “international character of the capitalist regime”.
“The centralisation of the means of production & the socialisation of labour reach a point at which they become incompatible with their capitalist integument. This integument is burst asunder. The knell of capitalist private property sounds. The expropriators are expropriated.” (p. 929)