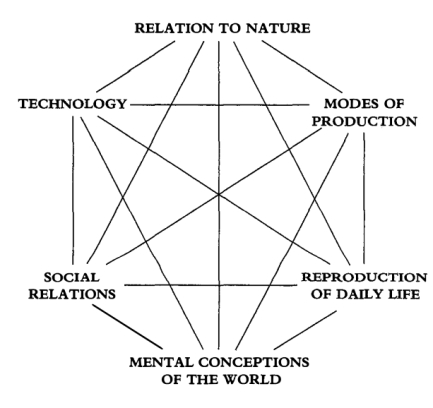 Chapter 12 – The Concept of Relative Surplus-Value

This chapter introduces the concept of relative SV.

(Although in practice this is often done by paying labour-power below its value, Marx is assuming that all commodities exchange at their value for now, so this possibility must be left aside).

The necessary labour-time can only be reduced by reducing the value of labour-power, i.e. the amount of labour-time required to produce the worker’s means of subsistence.

This is turn depends on an increase in the productivity of labour.

Capital can no longer take the mode of production as given.

(Note: a fall in the value of labour-power does not mean a fall in the real wage, but rather a reduction in the time required to produce the means of subsistence)

This leads Marx to distinguish absolute SV “which is produced by the lengthening of the working day” from relative SV “which arises from the curtailment of the necessary labour-time” (p. 432)

Relative SV cannot be produced directly by a single capitalist, for it depends on a reduction in the time taken to produce the worker’s means of subsistence, and thus involves a large number of capitalists improving their methods of production.

Hence improvements in the productivity of labour in industries producing ‘luxury’ goods do not affect the rate of surplus value – they simply cheapen capitalists’ consumption goods.

Improvements in productivity do not benefit the capitalist who introduces them as much as they benefit all capitalists taken together. If the productivity of labour in baking is improved so that bread is cheapened and money wages correspondingly reduced, the gains accrue to all capitalists, not only to the bakers.

Why do individual capitalists introduce these improvements in productivity?

It is competition that drives each individual capitalist to increase the productivity of labour.

As other capitalists introduce the new methods of production the price will fall and the extra profits will be eroded.

Thus every capitalist will seek to improve the productivity of labour to increase his profits, or to defend his profits from competitive erosion.

In the short-run the extra profits produced will accrue to the capitalist who introduced the new technique. But soon competition will erode this extra profit and the price of the commodity will fall.

If this commodity enters into the production of the workers’ means of consumption, or enters their means of consumption directly, the fall in price will reduce the value of labour-power, and so the necessary labour-time, and so increase the rate of SV for all capitalists.

If it is a luxury item the cost of living of capitalist will fall, but there will be no increase in SV (pp. 433-7)

It is important to understand that the earning of extra profits by an individual capitalist who introduces an improved method of production is not the same thing as the production of relative SV, which involves the capitalist system as a whole.

In particular, the capitalist who produces luxury goods can earn an extra profit, but make no contribution to increasing relative SV.

Thus the individual capitalist seeks to economise on labour, to reduce the amount of labour needed to make his product. The implication of the constant advance of productivity for the system as a whole, however, is a “cheapening of the worker”, a reduction of the value of labour-power, and so an increase in SV.

Thus SV can be increased not only by extending the working day, but also, as capital transforms methods of production, by increasing the productivity of labour.

Chapters 13, 14 and 15 deal with the progressive transformation of the mode of production carried out as capital took hold of production.

It is the progressive transformation of the mode of production that leads to the steady increase in the productivity of labour and so the production of relative SV.

Chapter 13 considers ‘cooperation’ which is the basis of all capitalist production: the bringing together of a large number of workers under the command of a single capitalist.

Initially capital simply increases the scale of handicraft production. This increase in scale has its effects:

Chapter 14 – The Division of Labour and Manufacture

This chapter considers the development of manufacture, the form of cooperation based on the division of labour.

Manufacture assembles specialised workers in one place and breaks down the process of production into a series of distinct tasks.

This divides up the skills of handicraft production to give a labour force of workers with very narrow specialisations, on the one hand, and unskilled workers, on the other.

It is only through the exchange of products as commodities that labour of different forms is brought into contact with one another.

Social relations in the factory: the deskilling of labour, the domination of man by machine, the separation of mental from manual labour, the rigid discipline, the use of the machine as a weapon in the struggle of capital against labour and the worker’s illusion that it is the machine, rather than capital, that oppresses him.

The chapter is really an essay on the history of technology.
It is about how the industrial form of capitalism emerged out of the world of handicraft & manufacturing.

Marx clearly envisaged his work as some sort of continuation of Darwin’s, with the emphasis on human rather than natural history.

“the writers of history have so far paid very little attention to the development of material production, which is the basis of all social life, & therefore of all real history” (p. 286)

There has been a human evolutionary process in which we can discern radical shifts not only in technologies but in whole modes of social life.

There is a dialectical relationship between them all. Not a technological determinism.
Technologies & organisational forms do not descend from the sky. They get produced out of mental conceptions. They also arise out of our social relations & concrete responses to daily life.

In the chapter itself Marx deals with the difference between tools & machines, where the key difference is tools rely upon human energy, whereas machines have an external source of power, e.g. steam-power.

“In handicrafts & manufacture, the worker makes use of a tool; in the factory, the machine makes use of him” (p. 548)

His next focus is how value is transferred from machines to products.
Somehow the value congealed in the machine must be transferred even though no physical transfer of matter is involved.

“The use of machinery for the exclusive purpose of cheapening the product is limited by the requirement that less labour must be expended in producing the machinery than is displaced by the employment of that machinery.” (p. 515)

As Marx observed, in North America the relative scarcity of labour meant high labour costs, so employing machines made sense, but in Britain the existence of surplus labour meant cheap labour & less incentive to use machines.

Marx then considers the impact of machinery on employment: it may throw workers out of work.

Although increased accumulation creates more jobs, even when workers can get new employment their situation becomes unstable: in and out of work.

The depreciating value of the machine should be less than the value of the labour replaced by it.
This creates uneven geographical development – the law of uneven development.

Capitalists strive to recuperate the value congealed in the machine as fast as they can.

“The Compensation Theory” of section 6 recognises that the labour saved from new technology can mean an expansion in production as some of this labour is reabsorbed. But there is no automatic reason why it should be reabsorbed.

Marx notes the size of unproductive labour from figures from the 1861 census: all the persons employed in textile factories & metal industries, taken together, total 1,039,605, while those in mining accounted for 565,835, compared with 1,208,648 persons in the servant class.

Cyclical fluctuations become important.
The competitive search for the ephemeral form of relative surplus value becomes overwhelming. Individual capitalist organisations, responding to the coercive laws of competition, behave in a way that is not necessarily in the interests of the capitalist class as a whole.

“The life of industry becomes a series of periods of moderate activity, prosperity, over-production, crisis & stagnation.”