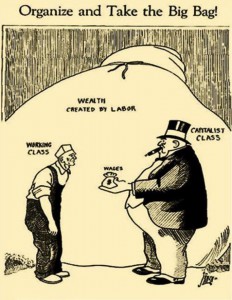 This chapter examines the wage-form, in which the value of labour-power appears in the form of wages for labour and so makes it appear as though the worker is paid not for his labour-power, but for the labour he has performed.

The form of appearance is fundamental to the ideology of capitalist society…all labour appears as paid labour.

Marx argues that in taking account of different national wage levels we have to take account of the social conditions of labour in different countries – the historically developed level of workers’ needs, the price of necessities, the extent to which the labour of women and children is used, the length of the working day, the productivity and intensity of labour.

Since the productivity and intensity of labour vary from country to country, labour-times cannot be directly compared across national boundaries.

Thus commodities do not have a common international value.

Correspondingly, capitals of countries with high productivity and intensity of labour are able to appropriate super-profits through international trade, by selling their commodities abroad at prices above the national value in the supplying country, but below that in the buying country.

Finally, high wages should not be equated with a lower level of exploitation.