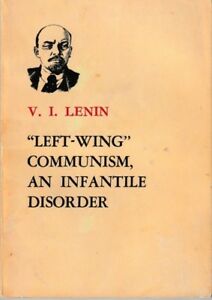 I. The Significance of the Russian Revolution

Lenin expects revolution in an advance country & Russia will then cease to be the model.

Kautsky in 1902 ‘The Slavs & Revolution’ wrote that the Slavs were becoming the centre of revolutionary thought.

The dictatorship of the proletariat.

Lenin says Bolshevism has existed since 1903 & the reason for party discipline.

Built by class consciousness of the vanguard & its ability to link with the masses.

Also the correctness of political leadership, its strategy & tactics, as seen by the experience of the masses.

The correct revolutionary theory is not dogma.

IV. The Struggle Against Enemies Within the Working Class Strengthened Bolshevism

The struggle against opportunism & ‘social chauvinism’.

3 main issues with the Socialist Revolutionary party:
1. Not Marxist – no appraisal of class forces before taking action
2. Used individual terrorism (rejected by Marxists)
3. Sneered at the SDP opportunism when itself was opportunist

The superiority of the Soviets over parliament.

Bolshevik struggle against ‘Left’ deviations:
1. 1908 on whether to participate in parliament
2. 1918 Treaty of Brest-Litovsk

In 1908 the ‘Left’ Bolsheviks were expelled.

But as 1905 showed sometimes it is best to reject parliament – because at the time mass strikes were developing.

The 1906 boycott of the Duma by the Bolsheviks was a mistake.

Bukharin acknowledged his error of rejecting Brest-Litovsk.
It was a compromise with the imperialists that had to be made.

To reject compromises on principle is childishness.

Russia is making the transition from capitalism to socialism.
Classes still remain & will remain for years.
In Britain this period may be shorter.

The dictatorship is exercised by the proletariat organised in the Soviets, guided by the Bolsheviks, directed by the Central Committee (Organising Bureau & the Political Bureau).

The state institutions are guided by the CC.

Industrial unions to later eliminate the division of labour, to educate & school people, give them all-round training, so that they are able to do everything.

The art of politics consists in correctly gauging the conditions & the moment when the vanguard can successfully assume power.

A struggle against the ‘labour aristocracy’.

We must work wherever the masses are to be found.

VII. Should We Participate in Bourgeois Parliaments?

A political party’s attitude towards its own mistakes is one of the most important & surest ways of judging how earnest the party is & how it fulfils in practice its obligations towards its class.

How can one say that parliamentarianism is obsolete when millions of the proletarians are not only still in favour of parliament in general, but are downright counter-revolutionary?

The ‘Lefts’ have mistaken their desire for objective reality.

You must soberly follow the actual state of the class consciousness & preparedness of the entire class.

The struggle on the parliamentary rostrum is obligatory on the party of the revolutionary proletariat specifically for the purpose of educating the backward strata of its own class.

Whilst you lack the strength to do away with parliaments, you must work within them because it is there that you will still find the workers…otherwise you risk turning into nothing but windbags.

How far are the masses are prepared to accept the Soviet system & to dissolve the bourgeois democratic parliament?

The Constituent Assembly was dispersed on the 5th January 1918.

It is useful during a revolution for a combination of mass action outside a reactionary parliament with opposition sympathetic to the revolution within it.

Without a revolutionary mood among the masses, & without conditions facilitating the growth of this mood, revolutionary tactics will never develop into action.

Tactics must be based upon a sober & strictly objective appraisal of all the class forces in a particular state as well as of the experience of revolutionary movements.

It was easy for Russia, in the specific & historically unique situation of 1917, to start the socialist revolution, but it will be more difficult for Russia than for European countries to continue the revolution & bring it to its consummation.

During the 1914-18 imperialist war between two groups of equally predatory countries, social-chauvinism was the principal & fundamental type of opportunism, i.e. support of ‘defence of the country’ which in such a war was really equivalent to defence of the predatory interests of one’s ‘own’ bourgeoisie.

Our theory is not dogma, but a guide to action.

It is entirely a matter of knowing how to apply these tactics in order to raise – not lower – the general level of proletarian class consciousness, revolutionary spirit, & ability to fight & win.

The petty-bourgeois democrats inevitably vacillate between the bourgeoisie & the proletariat, between bourgeois democracy & the Soviet system, between reformism & revolution, between love for the workers & fear of the proletarian dictatorship, etc. The Communists’ proper tactics should consist in utilising these vacillations, not ignoring them.

Revolution is impossible without a nation-wide crisis affecting both the exploited & the exploiters. It follows that, for a revolution to take place, it is essential, first, that a majority of the workers (or at least a majority of the class conscious, thinking & politically active workers) should fully realise that a revolution is necessary, & that they should be prepared to die for it; second, that the ruling class should be going through a governmental crisis, which draws even the most backward masses into politics, weakens the government & makes it possible for the revolutionaries to rapidly overthrow it.

Lenin doesn’t answer whether to affiliate to the Labour Party or not.

The fundamental principles of communism: the Soviet system & the dictatorship of the proletariat.

Victory over opportunism & left doctrinairism within the working class movement; the overthrow of the bourgeoisie; the establishment of a Soviet system & the proletarian dictatorship.

The masses must have their own political experience.

The immediate objective of the class conscious vanguard of the international working class movement is to be able to lead the broad masses to their new position.

Britain – we cannot tell how soon a real proletariat revolution will flare up there, & what immediate cause will most serve to rouse, kindle, & impel into struggle the very wide masses who ares till dormant…It is possible that a breach will be forced, the ice-broken, by a parliamentary crisis.

Since communism cannot be built otherwise than with the aid of the human material created by capitalism, & the bourgeois intellectuals cannot be expelled or destroyed, but must be won over, remoulded, assimilated & re-educated, just as we must re-educate the proletarians themselves, who do not abandon their petty-bourgeois prejudices at one stroke…