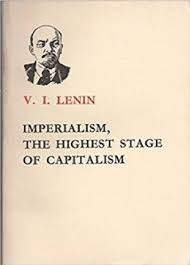 Written during WWI & the collapse of the Second International.

Lenin demonstrated how the crisis of 1873 played a key role in kicking off the process that led to the transformation of industrial capitalism into monopoly capitalism. Lenin showed that industrial capitalism based on free competition reached its peak on the eve of the 1873 crisis. Within 30 years after the outbreak of that crisis, capitalism had been transformed into the monopoly-ridden imperialism that dominated the entire inhabited globe by the turn of the 20th century.

Lenin strongly praised Rudolf Hilferding’s “Finance Capital,” first published in 1910, because it was the first Marxist work on political economy that put monopoly at the center of its analysis.

Are Workers More Exploited in Advanced Economies Than Developing Ones?

Some (Euro-) Marxists believe they are & quote Marx in support, “It will be found, frequently, that the daily or weekly, etc., wage in the first nation is higher than in the second, whilst the relative price of labour, i.e., the price of labour as compared both with surplus-value and with the value of the product, stands higher in the second than in the first.” Capital, Vol. I

Other Marxists support the ‘dependency theory’ & argue they are not.

The Value of Labour Power

The wage-form required to purchase the necessary use-values to sustain the life of a worker in India compared to a worker in the UK are not necessarily the same.
Workers in different parts of the world require a different basket of use-values, e.g. overcoats in cold climates.
A biological minimum exists below which the working class cannot reproduce itself.
Workers, usually through trade unions, fight in a class struggle with the capitalists for more than this biological minimum; a moral element, to participate in ‘human civilisation’.
And over time the use-values change, e.g. today access to the internet is increasingly necessary.

This is the story of the USA replacing Britain as the leading industrial capitalist country.
They could out compete Britain although labour costs were higher.

The higher the rate of surplus value the more capitalists can negate the rise in the organic composition of capital & the falling rate of profit.
Countries with large peasant populations use to hard manual labour & a subsistance living provide the opportunity of low wages & so high rates of surplus value.
In Asia the development of the means of production has in many cases come about through global capital.
The imperialist countries, particularly the USA, have been able to extract vast quantities of surplus value from the rapidly expanding industrial proletariat of the Asian countries.

2 & 3 are not accepted by all Marxists.
Some, such as Sweezy & Baran, state that the passing of the Glass-Steagall Act in 1933 broke the power of the banks.

In his book Finance Capital, Hilferding claims that a handful of Berlin bankers effectively control the whole of German industry.

The bulk of surplus value production has shifted from imperial countries to the oppressed countries.

The Decay of British capitalism

In the 1860s, the British textile industry was violently disrupted by a shortage of cotton, caused by the U.S. Civil War. As a result, the industrial capitalists in what was then Britain’s most important industry were unable to transform a portion of their money capital into real capital. Thus frustrated, they were encouraged to export a portion of their capital they would normally have invested at home. As a result, the export of British capital invested abroad exploded, growing more than 400 percent between 1862 and 1872.

As Britain increasingly invested its capital abroad as opposed to at home, economic growth declined in Britain but accelerated in the countries importing British capital. This was particularly true of the United States, which protected its internal markets by imposing protective tariffs. Germany, newly unified by Bismark’s wars, did the same. These developments brought to an end Britain’s 19th-century industrial monopoly that had dominated the era of industrial capitalism proper.

Britain was hindered by aging industrial plant and the older more decentralized methods of production appropriate for the early phase of industrial development.

As Britain’s relative industrial power declined, so did the material basis of its military power.

Britain is now in a post-industrial era, where the economy is dominated by services & finance but is dangerously dependent on the industry & the workers of China & other nations of the global south, whose largely non-white classes are being exploited by finance capital.

Taking the world economy as a whole, the productive forces have long outgrown the nation-state. The revolution in communications represented by the rise of the Internet & the smartphone is increasingly breaking down global, linguistic, and cultural boundaries.
But the nation-state has refused to peacefully fade away.
Within the imperialist world there is a counter-tendency of resurgent economic nationalism & anti-immigrant sentiment, as Trump represents.

In economic terms, the nation-state is a fraction of the world market that is partially walled off by tariffs & other trade restrictions. It makes use of a common currency, & has often restricted the outflow of money from the country. In this way, the nation-state attempts to maximize monetarily effective demand within its borders at the expense of other nation-states.

The nation-state aims to ensure the largest share of the world market & maximum access to raw materials & labour for its capitalists at the expense of the capitalists of other countries. The relationship among bourgeois nation-states is therefore at bottom antagonistic. In a nuclear age that threatens humanity’s existence.

Using this theory some Marxists argue China is sub-imperialist.

Paying Workers Less Than the Value of Labour Power

As cheap commodity prices fade in importance as a way monopoly capitalists of the global north share super-profits with the upper layer of the working class, the private ownership of homes takes on increased importance. The evil is not the private ownership of the houses but the private ownership of the land under the houses. Many better-paid workers who have built up substantial equity in their homes benefit from rising home prices. These land rents are ultimately a portion of the super-profits being squeezed out of the super-exploited workers of the global south. A portion of these super-profits – stolen wages – are then shared with better-paid workers who have built up equity in their homes – or rather in the land under the homes.

The Falling Rate of Profit

Cheap labour enables capital to resist the fall in the rate of profit in two ways. First, all other things remaining equal, a higher rate of surplus value means a higher rate of profit. But all things are not equal. The lower the value of labour power the more likely the capitalists will select a “method of production” that uses labour power – variable capital – rather than constant capital, therefore slowing down the rise in the organic composition of capital, which all things remaining equal lowers the rate of profit.