The Ideas of Keynes 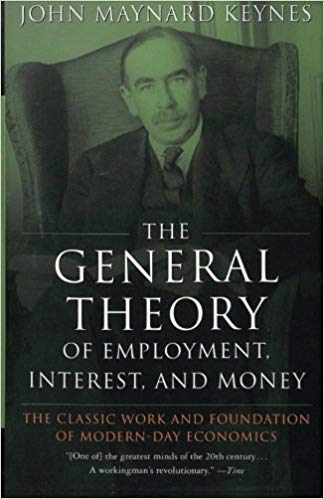 The Economic Consequences of Peace (1919) – a critique of the Treaty of Versailles
The General Theory of Employment, Interest & Money (1936)

Argued that government & central bank intervention was needed to resolve capitalism’s crises.
When there was a shortfall of private sector spending, government deficit spending could make up for it.
A claim that dates back to Malthus who advocated massive government spending to avoid ‘general gluts’.
Keynesian economists argue that post-war government spending prevented a return of mass unemployment.

The Marginalist Theory of Value

Keynes based his economic analysis on marginalism.
Objects are assumed to have value because they are scarce relative to subjective human needs.
Because items of consumption are scarce, it is assumed the factors of production that produce them are also scarce.
So each factor of production is assumed to produce value according to its relative scarcity.

He was taught by Alfred Marshall who was a committed marginalist.

Competition drives the economy to the equilibrium position where profits disappear.
Only interest can be earned.
This interest comes from capitalists abstaining from consumption & lending their capital for ‘productive service’.

Trade unions only distort the wage market by imposing monopolistic practices that increases wages above the market equilibrium & so creates unemployment.

There can be no concept of ‘overproduction’ for marginalists as all commodities are assumed to be scarce.
He aimed to create a form of marginalism that could explain the mass unemployment of the 1930’s.

Marginalists assume the wage is equal to the marginal product of labour.
“…the wage of an employed person is equal to the value which would be lost if employment were to be reduced by one.” Keynes, Ch. 2 of The General Theory
This is the first postulate (an assertion without proof).

As  more workers are hired it is assumed that the marginal product of labour will decline because the products produced become relatively less scarce. Hence their value & so price decline.
But the greater the demand for labour the higher the wage. Hence an equilibrium will be reached where the marginal product equals the marginal cost.

Workers are assumed to be producing a quantity of value that is exactly equal to the value of their wages.
There is no exploitation.

Second postulate: “..the utility of the wage when a given volume of labour is employed is equal to the marginal disutility of that amount of employment…That is to say, the real wage of an employed person is that which is just sufficient to induce the volume of labour actually employed to be forthcoming; subject to the qualification that the equality for each individual unit of labour may be disturbed by a combination between employable units analogous to the imperfections of competition…”

Outside of trade union monopolistic practices, unemployment is just frictional & voluntary.
The experience of the 1930’s convinced Keynes that there was something wrong with this classical marginalist ‘proof’.

Marginalists of the Austrian School, such as von Hayek & von Mises argued the only way out of the slump was through massive wage cuts as trade unions & ‘socialist’ governments had increased wages above the level required for full employment.
But as wages were cut there was no sign of full employment returning.
Keynes agreed that real wages needed to be cut, but cutting nominal wages was not the answer.

Keynes had strongly opposed Churchill’s decision in 1925 to restore the convertibility of the £ with gold at the old exchange rate of 1914 of $4.80.
Since the £ had fallen in value since then this amounted to a revaluation of 9% against gold & the US$.
The effect was to raise the price of labour power in terms of gold by 9%.
The bosses attempted to cut wages & this led to the General Strike of 1926.
For Keynes the answer was to increase the cost of living (inflation) so to reduce real wages without cutting nominal wages.
(Britain came off the Gold Standard in 1931 – the era of ‘competitive devaluations’)

Keynes held to the view that the general price level is determined by the level of money wages.
If wages go up, prices go up & real wages remain unchanged.
(An argument used to demonstrate the futility of trade union activity).

In the 1970’s Keynesian economists talked about the ‘wage-price spiral’.

The failure to distinguish between labour & labour power leads to the mistaken belief that all labour is paid for.

Commodity prices as a whole will rise if the value of the money commodity falls relative to the value of other commodities, e.g. when gold & silver were discovered in the Americas during the 16th century, prices rose.
The same happened with the gold discoveries of California & Australia between 1848 & 1851.

Therefore, contrary to Keynesian claims, an increase in token money, as opposed metallic money, can only provide a short-term recovery as prices will eventually increase.

If prices are measured in terms of gold, the long term trend has been strongly downwards since 1920.
This reflects the relative rising price of gold as mines become depleted.

If labour is paid its value, where does profit, interest & rent come from?

“It is much preferable to speak of capital as having a yield over the course of its life in excess of its original cost, than as being productive. For the only reason why an asset offers a prospect of yielding during its life services having an aggregate value greater than its initial supply price is because it is scarce; & it is kept scarce because of the competition of the rate of interest on money. If capital becomes less scarce, the excess yield will diminish, without it having become less productive – at least in a physical sense.” Keynes, Ch. 16, The General Theory

Hence the marginalists have reverted to the views of the Mercantilists – that surplus value arises in circulation, not production.

Keynes saw interest as the yield on money & profit as the yield on real capital.
The profit produced by industrial & commercial capitalists Keynes called the marginal efficiency of capital.
Effectively the rate of profit.
The MEC arises due to the scarcity of real capital, & interest due to the scarcity of money capital.
Like Marx, but unlike the classical marginalists, Keynes makes a distinction between real & money capital.

According to Keynes a contraction in the quantity of money will increase interest rates, not reduce prices.
Money is not neutral as the Monetarists argue.
Hence both Keynes & Marx reject the QTM.
Both also reject Say’s Law, & Keynesians are also tend not to support the theory of comparative advantage.

Marx distinguished between metallic, token & credit money.
Neither Keynes nor the monetarists do.

Keynes argued the economy tends to the point where interest = MEC
This may or may not be at full employment because the rate of interest is determined by the relative scarcity of money.
he argued the classical marginalists confused the ‘special case’ of full employment with the general case.

Keynes saw the slowing down of population growth in the imperialist countries as a cause of the Great Depression, as population size was market size.

“Now, we have been accustomed in explaining the ‘crisis’ to lay stress on the rising tendency of the rate of interest under the influence of the increased demand for money both for trade and speculative purposes. At times this factor may certainly play an aggravating and, occasionally perhaps, an initiating part. But I suggest that a more typical, and often the predominant, explanation of the crisis is, not primarily a rise in the rate of interest, but a sudden collapse in the marginal efficiency of capital.” Keynes, Ch. 22 The General Theory

“that marginal efficiency of capital depends, not only on the existing abundance or scarcity of capital-goods and the current cost of production of capital-goods, but also on current expectations as to the future yield of capital-goods. In the case of durable assets it is, therefore, natural and reasonable that expectations of the future should play a dominant part in determining the scale on which new investment is deemed advisable. But, as we have seen, the basis for such expectations is very precarious. Being based on shifting and unreliable evidence, they are subject to sudden and violent changes.”

Psychological swings in mood are the basis of the business cycle.

This is the ‘Liquidity Trap’.

For Keynes the solution is for the government to intervene with massive deficit spending – fiscal stimulus.

Marx would have agreed that a low rate of interest is insufficient for recovery; that the rate of profit needed to increase.

Because the Great Depression dragged on, some supporters of Keynes argued that the liquidity trap had become permanent – ‘secular stagnation’. And this could only be solved by ever greater amounts of government spending.

For Keynes is was better to prevent the crisis by lowering interest rates, not increasing them, before the crisis.

Keynes didn’t understand that the rate of interest is determined by the supply & demand of metallic money. It cannot be simply adjusted by increasing or decreasing the money supply to bring investment into equilibrium with savings.

One of the primary functions of crises is to lower the prices of commodities in terms of gold, thereby increasing the rate of profit in the gold mining & refining industries. This stimulates the production of gold thus lowering the rate of interest. It is through this cyclical mechanism that the rate of interest is kept below the rate of profit in the long run. If prosperity became permanent, that is if we abolished crises, prices in terms of gold would rise, even if only gradually, without limit. Sooner or later, prices would lose all connection with the actual labour value of commodities. Gold production—or whatever commodity represents money material—would grind to a halt. The rate of interest would then rise without limit. As soon as the rate of interest swallows up the entire profit causing the profit of enterprise to fall to zero, the very incentive to produce surplus value is destroyed & capitalism collapses.

The collapse of the Bretton Woods system that fixed exchange rates to the $ & the $ to gold, opened the door for the fiat money experiment whereby currency was decoupled from gold, as advocated by Keynes (& Friedman).

The result, contrary to Keynesian expectations, was the dramatic rise in the currency price of gold, i.e. depreciation of token money, & so rapid inflation.

It was ended by the Volcker Shock & the rise of Monetarist economics & the demise of Keynesianism.

Keynesian economics can only change the form of the crisis from a deflationary depression of the 1930’s to an inflationary stagnation of the 1970’s, not abolish crises.

Keynes, like Marx, Ricardo & Adam Smith, believed there was a long-term decline in profitability.

Keynes held that if the quantity of real capital increases relative to the population, the total quantity of fixed capital will become progressively less “scarce,” and the rate of profit (MEC) will fall.

“Now, though this state of affairs would be quite compatible with some measure of individualism [that is, capitalism—SW], yet it would mean the euthanasia of the rentier, and, consequently, the euthanasia of the cumulative oppressive power of the capitalist to exploit the scarcity-value of capital.”
(For Keynes the ‘capitalist’ he refers to are the money capitalists).

For Keynes, as capital becomes less scarce & profits fall, more goes to the labourers in real wages & so the class antagonism subsides.

State intervention was for purchasing capital, not productive investment as this would increase the amount of capital, make it even less scarce, & so put further downward pressure on the MEC.

Keynes thought that economic growth would eventually end & capitalism would be on the basis of simple reproduction. Interest rates would be zero & profit rates minimal. Money capitalists would be abolished by private ownership of the economy would remain.