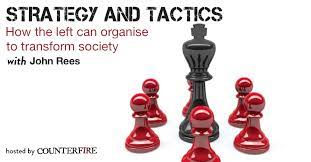 Introduction: What is to be done?

“The philosophers have only interpreted the world, in various ways, the point is to change it” Marx, 11th thesis on Feuerbach
The unity of theory & practice
Which class & what political actors in that class are capable of making change happen?
What are we aiming for?
1. “By tactics in politics, we understand, using the analogy of military science, the art of conducting isolated operations. By strategy, we understand the art of conquest, i.e. the seizure of power” Trotsky
2. Strategy & tactics from military theorist von Clausewitz
3. Tactics are subordinate to strategic goals
4. Second International had abandoned the goal of socialist revolution
5. Lenin liked to quote Napoleon’s advice: “Let’s engage in battle & then we’ll see”.
6. At a certain point, all theoretical, strategic & tactical disputes can be resolved only in practice.

Whose strategy, whose tactics?

Need to start with the social structure
Economic & political subordination breeds passivity & fatalism – alienation.
The system also produces revolt.
In reality, there’s always a battle between where the workers’ interests lie:
– combating the system
– accepting the system
Workers interests v their consciousness
– just like smokers
– peer group pressure, family, education system, media
Most of the workers, most of the time have ‘contradictory consciousness’ (Gramsci)
We must find those organisations, slogans & ideas that counteract conservatism & passivity among workers.

Trotsky’s 5 workers: 1 revolutionary, 1 reactionary, 3 that can be swayed
Unite the 1 in 5 with a paper & hold meetings that develop explanations of the world & organise action, so they can be clearer & tougher about their politics & win over their fellow workers.
Uneven consciousness & need for a ‘vanguard’ organisation
“The militant minority must assemble in the form of an organisation” Georg Lukacs
Labour Party tries to be a broad party. They are big but are politically divided between a radical minority & a conservative majority.
How should the vanguard relate to, aim to organise, & strive to win over the rest of the working class?
How does the vanguard avoid becoming a sect?

Without organisational independence, revolutionaries will be tied to the more conservative layers of the working class
But an independent revolutionary organisation must relate to the wider struggles of the working class
Social democratic parties are shaped by the rhythm & direction of electoral & reformist politics
Tony Cliff’s picket line example: racist remark from fellow striker. To ignore it is liquidationist (you abandon your own anti-racist politics); to protest & walk away is sectarian (you demonstrate your principles but weaken the strike); the right thing is to argue but stay on the picket line & link-arms when the strike-breakers arrive.

The vanguard cannot substitute itself from the working class as a whole
The party does not & cannot make the revolution
The vanguard must learn from the working class, but it must also unite what it learns with the totality of the revolutionary struggle.
The totality of the struggle is the accumulated historical experience of the working class in its battle with capitalism. How capitalism works, how imperialism works.
The revolutionary organisation is ‘the memory of the class’ & ‘the university of the class’.
Only practice will tell if we have learnt the right lessons.
The party both learns from & summarises the past experience of the struggle.
It proposes action based on what it has learnt.
And it assesses the correctness of these proposals according to what it learns anew from its conscious attempt to intervene in the struggles of workers.

Events are constantly changing.
What a revolutionary organisation may be able to achieve at one time may not be achievable even a short time later.
Shakespeare & the tide in the affairs of men.

Lenin: the art of politics lies in finding & taking as firm a grip as we can of the link in the chain that is least likely to be struck from our hands, the one most important at the given moment, the one that most guarantees its possessor the possession of the whole chain.
Lenin: Anybody who tackles the partial problems without having previously settled general problems, will inevitably & at every step come up against those general problems without realising it. To come up against them blindly & in every individual case means to doom one’s politics to the worst vacillation & lack of principle.

Tactical flexibility is only possible for an organisation that has a high degree of unanimity about its basic principles, & this requires a stable group of members who understand & transmit these ideas to other comrades & across the generations.
The cadre of the organisation gives it stability, durability & effectiveness in the struggle.
But cadres can produce their own organisational conservatism.
Cadre only remain cadre if they continue to relate correctly to the turning points in the struggle.

Two broad tasks: educate & organise
Propaganda: the need for collective ownership
Agitation: slogans for simpler & direct ideas, e.g. “strike now for more pay”, “troops out!”
In between there is concrete propaganda: a demand which the majority of workers think is possible & desirable, but which alone, they do not have the power to enact, e.g. a windfall tax on profits
Need to listen to the workers
Lenin: propaganda & agitation is not enough, the masses must have their own political experience.

The vanguard must always be in touch with the rearguard.
Can’t ‘leap over’ the current consciousness of the class.

Trade union slogan: unity is strength; united we stand, divided we fall
Trotsky’s 5 workers metaphor
Trade union bargain within the capitalist system, hence they inevitably compromise
Officials often end up with better pay & conditions than those they represent
Trotsky: with the masses – always; with the vacillating leaders – sometimes, but only so long as they stand at the head of the masses.

Marxists: intellectual thought & practical politics go together
‘What is to be done’ is closely linked to Marxist philosophy
We can’t be sure of making the right judgements but the struggle itself provides the test
The facts require interpretation: Marx, “if appearance & reality coincided, there would be no need for science”.
As well as the struggle we also need theoretical experience. The interpretation of the struggle.
The starting point is the contradictory nature of our society. Uneven, contradictory consciousness requires the need for a vanguard organisation.
Capitalism: requires collective labour of workers to produce wealth, but capitalists privately appropriate that wealth.
Approach:
1. Analyse the most general objective economic, social & political contradictions
2. Examine the contradictory forms of consciousness & organise these
3. Specify what forms of organisation, slogans & demands will advance the struggle
4. Develop organisational tools capable of realising these tactics
Lenin: only a concrete analysis of a concrete situation could be a guide to action
Lenin: the truth is always concrete. In each case, generalities may or may not apply.
The subjective element. Not just in assessing the workers’ consciousness, but the effects of our actions as organised revolutionaries.
Lukacs on Lenin: He studied in order to learn how to apply the dialectic; to learn how to discover, by concrete analyses of concrete situations, the specific in the general & the general in the specific; to detect the part in the whole & the whole in the part. Leninism represents a hitherto unprecedented degree of concrete, unschematic, unmechanistic, purely praxis-oriented thought. To preserve this is the task of the Leninist.